Natural relief for women receiving taxane chemotherapy Women with breast cancer receiving taxane chemotherapy endure a host of troublesome side effects that affect their ability to perform simple activities of daily living. One, particularly distressing, toxicity is nail damage (onycholysis), which can affect up to 50%1,2,3.  The level of severity can range from asymptomatic simple ridges (Beau’s lines) to distressing symptoms where the nails feel hot, sensitive and painful, followed by separation of the nail from the bed. This disruption of the normal anatomy leads to

The level of severity can range from asymptomatic simple ridges (Beau’s lines) to distressing symptoms where the nails feel hot, sensitive and painful, followed by separation of the nail from the bed. This disruption of the normal anatomy leads to secondary infection that adds to the grief and damage.

What is currently advised?

The dose of chemotherapy may be reduced which may reduce its therapeutic effect. Anecdotal strategies including nail hygiene, wearing nail varnish and avoiding trauma with little evidence of effectiveness. Cooling the nails bed with commercially available gloves are available but they are not popular among chemotherapy nurses as they prevent assessment of the patient’s extremities4,5,6. 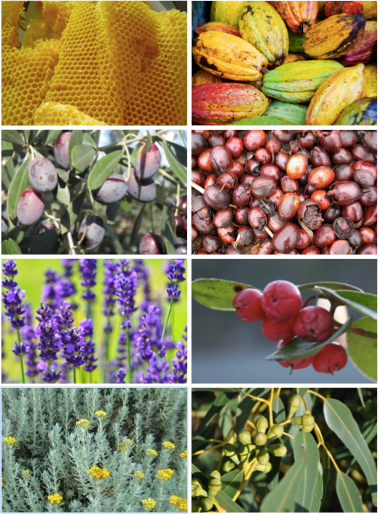 This trial was designed by a scientific committee consisting of phytochemists, herbalists, patients, oncologists and oncology nurses from Bedford and Addenbrooke’s Cambridge University Hospitals. It worked in liaison with the National Cancer Research Institute’s lifestyle and behavioral change work stream.

The bioactive properties of several plant extracts were reviewed from the available published data.  With an understanding of how chemotherapy damaged nails, it became clear that many of these natural plant extracts were rich in phytochemicals, particularly the polyphenolic acids and polyphenols. It was hypothesized that their biological properties which could protect the nail bed from chemotherapy if applied locally7,8,9,10,11,12. (Read more about the trial rationale and design on cancernet.co.uk/polybalm.com).  In summary these properties include: 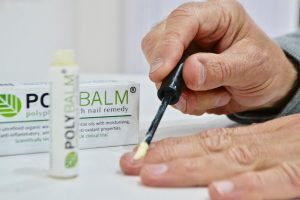 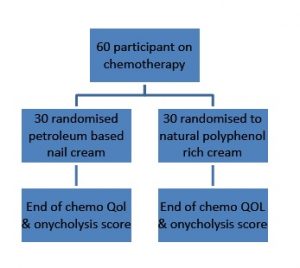 60 participants receiving chemotherapy for were randomised to apply either a simple petroleum moisturising balm to their nail bed 1-3 three times a day or the investigational balm now known as polybalm. Neither the patients, doctors, research team nor statistician knew which balm was assigned to which participant. Four independent tools measured the health of the nails. Two completed by the patient measured severity of symptoms and how they affected QOL and two by physicians assessed the physical disfigurement.

Only two participants had significant deterioration of nail quality in the polybalm group. On average, there was a 180 fold difference in patient recorded QOL and an 11 fold difference in physician recorded disfigurement but both differences were highly statistically significant in all scores (unpaired T-test p<0.00001). There were no reported allergies or adverse events related to either creams. The patients in the polybalm group who had some nail changes also suffered from other severe chemotherapy complications including neutropenic sepsis, diarrhea and peripheral neuropathy13.

The polyphenol rich essential oils and plant-based waxes in this nail bed balm profoundly reduced chemotherapy related nail damage and improved nail related quality of life compared to a plain petroleum based balm. The significant improvement in nail related quality of life will be welcomed by patients suffering this unwelcome toxicity chemotherapy.

Footnote: This study was audited to comply with good clinical practice guidelines and Cambridge University Central Research Ethics Committee approval. It was registered with the Health Research Authority. The balms were made specifically for this study by a UK registered manufacturer, which is fully compliant with European Union Cosmetics Standards. No member of the research team received payments to recruit patients into the study. The MHRA class these items as cosmetic products so they cannot be recommended for any medical condition or claim health benefits. The protocol was in the public domain and the balm, named after the clinical trial, is now distributed by an independent organization that has no connection to the trials unit (see polybalm.com).